LoginSign Up
Table of contents
Lesson 2
What is the difference between fiat money and cryptocurrency? 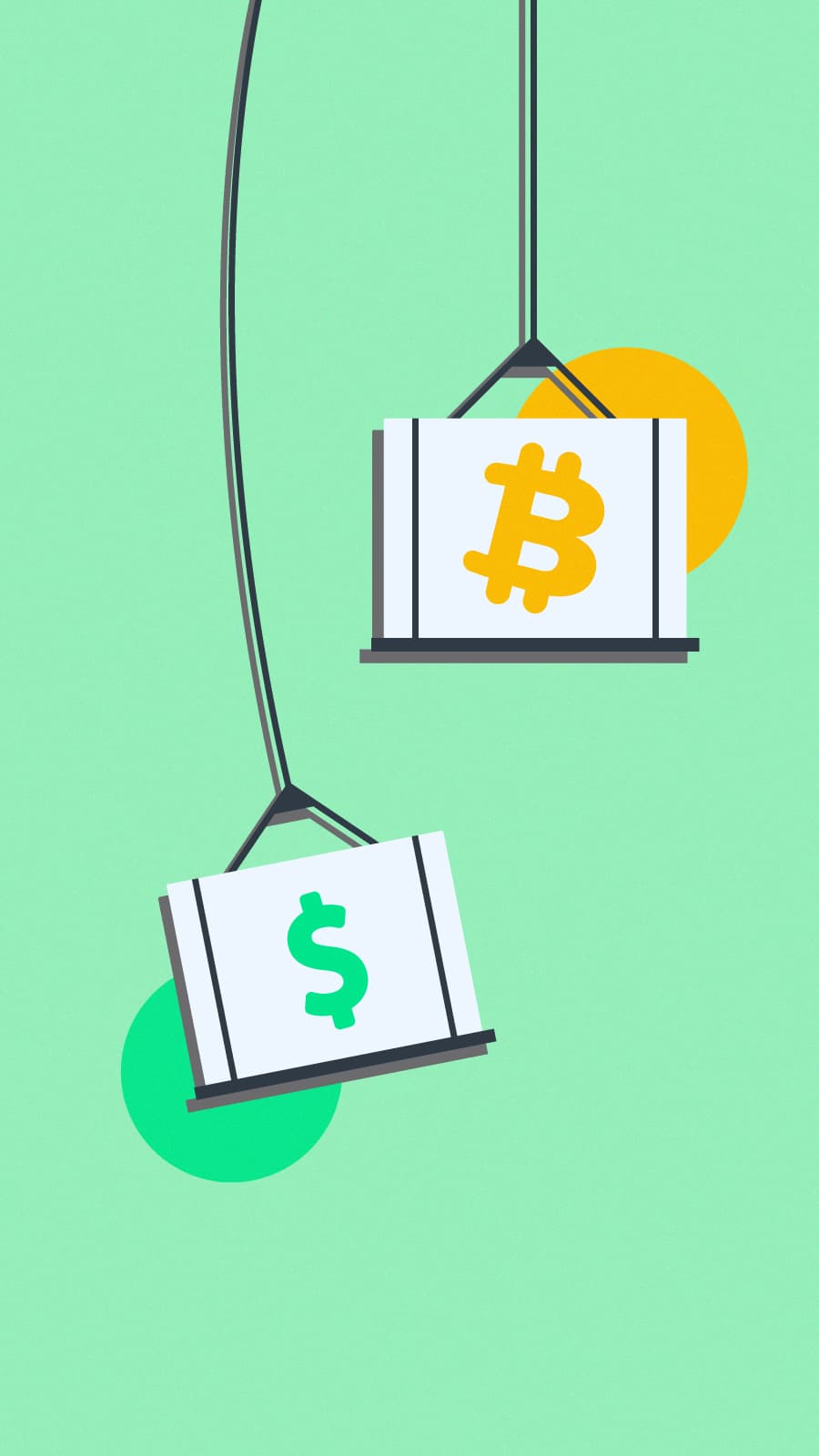 What is the difference between fiat money and cryptocurrency?

Almost every country uses fiat money. Most countries in Europe use the euro as their fiat currency. These currencies are centrally managed by the European Central Bank (ECB) and can be used in countries that recognize the euro as legal tender.

Over the past few years, another type of currency, cryptocurrencies, has been gaining in popularity. Cryptocurrencies are digital currencies that are not managed by a central authority such as a bank, but that can be exchanged directly between users. These cryptocurrencies differ from fiat money in a few areas.

What is fiat money?

Fiat money is a currency that is recognized as legal tender by a government, and the value of which is determined by demand and supply. This means that the value is not linked to a certain raw material, such as gold or silver. Fiat money therefore has no intrinsic value.

When demand for a fiat currency exceeds supply, under the classic economic model the price should increase. The same holds true vice versa: when demand drops relative to supply, the price may fall.

An important aspect of fiat currency is that the value is determined by the confidence people have in the currency. When the population no longer has confidence in the fiat currency, its value will fall.

Cryptocurrencies, or crypto coins, are digital currencies that use the blockchain technology. It is in fact a type of code that can be assigned to an owner. The blockchain’s ledger records the owner of the relevant cryptocurrency. This ledger can be compared to a database.

A cryptocurrency’s owner can send the currency directly to another person. This means that the transaction does not need to be checked by a central authority, such as a bank.

The decentralized network consists of hundreds, if not thousands of different computers that are connected to each other. Together, these machines ensure that users can safely perform their transaction.

The first and most famous cryptocurrency is Bitcoin. This is a cryptocurrency for which in total only 21 million coins will ever be in circulation. It is not possible to eventually create more units than that.

Cryptocurrencies were created for various reasons. One of these reasons is the dissatisfaction and distrust that people had in fiat money after banks’ behavior resulted in the 2007 credit crisis. The idea behind Bitcoin arose the next year. Another reason for the creation of cryptocurrencies is that they are much easier to use as a global payment method. This is more easily understood by clarifying the difference between fiat money and cryptocurrencies.

What is the difference between fiat money and cryptocurrency?

The central authority also records money flows. This helps them trace money laundering practices and hold the perpetrators accountable. This mainly applies to virtually stored fiat money, such as the funds on a bank account. When a bank suspects that something isn’t right, they can report this to a government authority. The same can happen vice versa. When a government authority suspects that something isn’t right, there’s an option to request someone’s bank data.

Cryptocurrencies are not managed or controlled by a central party. Instead, transactions are executed directly between users. The blockchain’s network ensures that the ownership is recorded in the ledger. There are no central institutions or organizations that control where cryptocurrencies are sent, or how many cryptocurrencies someone holds.

No names or other personal data are linked to a transaction. Instead, a transaction is linked to the wallet address and public key, which appears to comprise random characters. The blockchain is therefore transparent, but does provide some anonymity to the users.

Also, the issuance of new cryptocurrencies is not determined by a central authority. Before a cryptocurrency is developed, the final number of units is programmed into the code. There is no central party that can simply adjust this.

The amount on a bank account does not have to be ‘real’. In fact, often the bank does not have the physical amount readily available in a safe. This means that the money is actually a bank’s debt to the owner of the amount, but also that it may be held by multiple individuals.

The following example will clarify this. A bank may have 1,000 euros in a safe, along with 20 customers who each have 100 euros in their bank accounts. When these individuals all want to withdraw their 100 euros, the bank will face a problem since it does not actually have enough money.

Other factors contributing to a cryptocurrency’s value are the places it can be spent, and how often it is used.

In the case of fiat money, it is not possible for people to see how much money is on someone’s bank account. They also cannot see what transaction someone is making, or where the transaction is sent. The only people able to see this are the employees of the bank where the money is kept. In a general sense, fiat money therefore is not a transparent currency.

Depending on the blockchain, cryptocurrencies can often be sent at low costs. The same is not true for fiat money. Executing a foreign transaction with fiat money can cost a lot of time and money. The sender’s bank will first have to check the transaction, and then convert the fiat currency into the fiat currency used in the country of receipt.

The transaction is then sent to the bank in the recipient’s country via intermediaries. This bank again checks the transaction, before depositing the amount onto the correct bank account. Because a lot of intermediaries are needed, it can cost a lot of money to execute a transaction.

Because cryptocurrencies have increased in popularity, the blockchain is used more often. Large cryptocurrencies such as Bitcoin (BTC) and Ethereum (ETH) now face scalability problems. This means that the blockchain’s network isn’t and can’t be large enough to process all transactions on time. As a result, the fees associated with a transaction may end up being higher.

What are the similarities between fiat money and cryptocurrencies?

In addition to the big differences, fiat currencies and cryptocurrencies also have things in common. For example, the value of both currencies is largely based on their acceptance.If all of the sudden, people stop accepting and using these forms of money, their value will almost always drop immediately. This means that the value of both forms will increase as soon as they are accepted and used by a larger group of people.

Fiat money has been used for decades by countries as legal tender. Its value is determined by the confidence people have in the currency, as well as by supply and demand. A central authority, such as a bank, is responsible for the issuance, control and management of fiat money.

Cryptocurrencies are digital currencies that are not controlled by one single central authority. Instead, it’s the blockchain’s decentralized network that ensures that users can send their cryptocurrencies to each other.

Because fewer intermediaries are involved with the use of cryptocurrencies, theoretically speaking it costs less time and money to carry out a transaction than is the case with fiat money. Still, many cryptocurrencies struggle with scalability, as a result of which it often takes more time to process a transaction. As a result, users pay higher fees for making a transaction.

Another important difference between fiat money and cryptocurrencies is the underlying value. Fiat money is often a debt that banks have towards their customers. The money deposited onto all bank accounts is not lying around in a safe. If everyone were to withdraw their money at the same time, banks would have a problem. This is not true for cryptocurrencies. A cryptocurrency is always assigned to and in the possession of one owner. The value is determined by various factors, including the purpose and function of the cryptocurrency.

Despite the many differences, fiat money also shares similarities with cryptocurrencies. Both forms of money derive their value primarily from the size of the group of individuals using and accepting them. Moreover, both forms of money are used as legal tender and can be split into smaller units.

Table of contents
Beginner - Lesson 2
Go to the next lessonWhat is blockchain?