LoginSign Up
Table of contents
Lesson 3
What is blockchain? 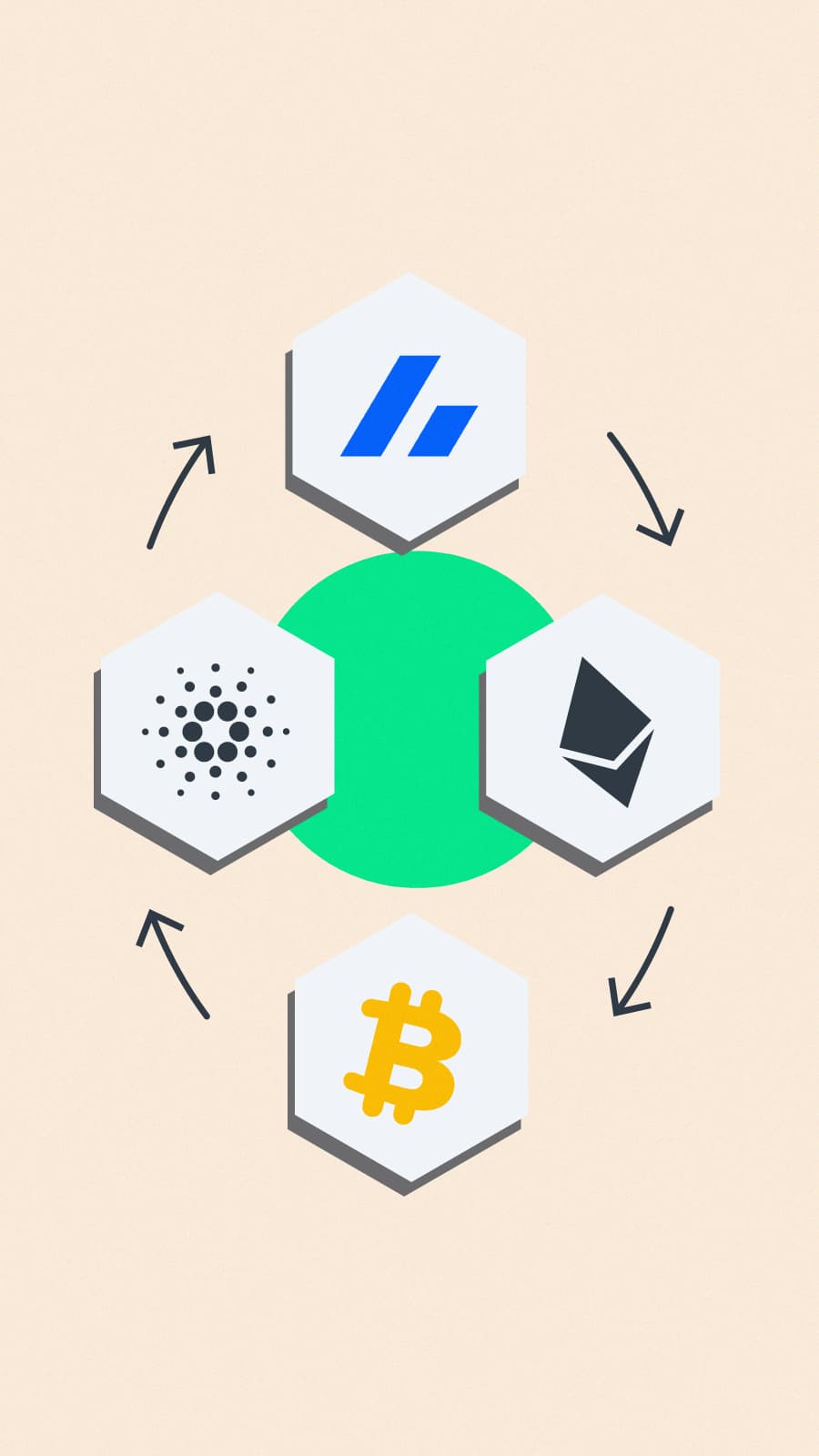 Blockchain is the technology behind cryptocurrencies, but it can additionally be used for many other purposes. The main three characteristics of blockchain technology are that it is decentralized, immutable and transparent. Partly because of this, the blockchain has also been called the most revolutionary technology since the Internet.

The blockchain is considered to be one of the most secure technologies available today. This is partly because the parties involved in a transaction must first sign it. This is done by means of a digital signature (which is also known as a private key), which should only be known to the rightful owner.

This security is also ensured because the blockchain consists of a network of thousands of computers. It is possible to store data on the blockchain, after which it is stored on all computers within the blockchain network. Thus, the data is not stored in one central place, as is the case with a web server, for example. This decentralization ensures that there is no single point of failure.

The decentralized network of the blockchain

The network of a blockchain consists of a large number of machines. These machines are all interconnected and can be either normal computers or large servers. The machines that are part of the blockchain network are called nodes.

Unlike traditional databases, a blockchain is decentralized. This is because the data is not stored in one place. All nodes within the blockchain network keep their own copy of the entire blockchain.

The data is not managed by one single authority. The blockchain is a peer-to-peer network, which means that transactions are carried out directly between two parties involved. There is no central authority in between, as is the case with banks.

Everything within the blockchain is transparent

How does the blockchain work?

The moment a user wants to perform a transaction, the transaction is sent to the blockchain network. The nodes will then check if this transaction is valid. When checking, they look, for example, at the balance associated with the sender’s address, to verify that the user has enough funds to carry out the transaction.

Creation of blocks and consensus mechanism

Once all transactions made within a certain time have been verified, they are merged into one block. The nodes do this by solving a mathematical puzzle. The consensus mechanism determines exactly how this is done. There are several blockchains and each blockchain may have a different consensus mechanism.

The consensus mechanism allows a blockchain to operate decentrally. Each node acts according to the rules set up in this mechanism and checks other nodes for compliance.

If a node does not act according to these rules, the network can punish the node for this.

The creation of new blocks can be compared to the creation of a folder on a computer in which various files are placed. These files are, as it were, the transactions that have been performed and the folder is the block. Because the folder can become very large, it is compressed and encrypted to ensure security.

Hashing of the block

A block on the blockchain consists of merged transactions. After the creation of the block, it is encrypted. The encryption is done by means of a hash function, which converts the block into a special code consisting of various characters. Before this happens, the hash of the previous block is added to the new block. This creates a chain of blocks that are all linked together. Hence the name of this technology: the blockchain.

The node that has added a new block to the blockchain receives a reward for doing so. This is called the block reward. How big this reward is varies from blockchain to blockchain.

The network can consist of thousands or millions of nodes. Each blockchain has a different number of nodes in its network. Because the nodes in the network have to agree with each other at different times, it could take an incredibly long time for a transaction to be executed. The solution to this is the Byzantine Fault Tolerance (BFT).

The BFT principle states that if at least 51% of all nodes agree on a particular choice, that choice will be implemented.

When a node has a new block ready, the other nodes will have to vote on whether this block is actually valid. This voting happens by means of the rules of Byzantine Fault Tolerance: as soon as at least 51% of the nodes agree with the new block, the block may be added to the blockchain.

Also, if a node does not do its job properly, the network will vote according to the BFT principle for a possible penalty. Should at least 51% of the network think that a node should be removed from the network, this decision will be implemented without any problems.

What can a blockchain be used for?

The main difference between cryptocurrencies and fiat currencies is that cryptocurrencies are generally not managed by a central authority, provided they run on a public blockchain. A fiat currency is issued by a government or central bank. They determine how much money will be in circulation, but also control and process all transactions that are made.

A cryptocurrency is managed decentrally on the blockchain network. The nodes within the network ensure that transactions are controlled and processed. This allows transactions to be carried out faster and at lower costs.

When someone wants to send money from Europe to another continent, it often takes several days before it reaches the recipient’s bank account. In the process, one often has to pay high transaction fees. Sending a cryptocurrency often takes a few seconds to minutes and requires only a few dollars in transaction fees.

For example, a blockchain could serve as a cloud. Traditionally, the cloud is a large server room where users can store their data. However, in the past there have been several problems with the central cloud of a number of companies, for example that users’ data was leaked. Because a blockchain uses cryptography, data on the blockchain is more secure.

Because the blockchain can store data, a lot of functions arise for this technology. To understand how widely blockchain technology can be used, the following practical example is helpful to know.

The advantage is that patients can be helped quickly anywhere in the world. Currently, it can take a long time for a practitioner to retrieve a patient’s data from abroad. After all, these are only stored on a central server of the healthcare institution.

Applications that run on a blockchain are called decentralized applications, but are better known as dApps (Decentralized Applications). The advantage of dApps is that the data is not stored on a central server. This is the case, for example, with an application like Facebook, which gives such an organization enormous power. The past has also shown that this data was not secured properly.

Blockchains can belong to a different category. In general, these are the three different types of blockchains:

Public / permissionless blockchain. The public blockchain is public and can be used by anyone. It is also possible for anyone to access the blockchain network as a node, without having to undergo verification first.

Hybrid / consortium blockchain. This type of blockchain is a combination of the public and private blockchain. It is not possible to just join the blockchain network, as a node will first need to get permission from an authority. This could be the developer of the blockchain, or a node appointed by someone else to control new nodes.

Is the blockchain secure?

Blockchain is considered to be one of the most secure technologies available today. This is one of the reasons why more and more companies are eager to use this technology. Generally speaking, a number of reasons can be given for the security that blockchains offer.

A blockchain’s history is not modifiable

The blocks in a blockchain are all connected to each other in that each hash of a block is stored in the next block. The appearance of the hash is completely dependent on the content of the block. Even if only one bit is modified, the hash will look completely different.

With the blockchain, the hacker would have to modify the contents of the block, which would also change the hash. The hash stored in the next block would then no longer match the new hash. This causes a break in the blockchain. The nodes in the network will immediately notice such a breach and consider this version of the blockchain to be invalid.

This technique makes it virtually impossible to modify past data. For this, a hacker would have to convince the entire network that his variant of the blockchain is the correct one, or ensure that he owns 51% or more of the network. We also call this a 51% attack.

Due to Byzantine Fault Tolerance, a decision can only be made once at least 51% of the network agrees. Performing a 51% attack is extremely difficult in the case of large blockchains, as an incredibly large amount of energy and servers are required. Blockchains with a smaller network are generally more vulnerable to a 51% attack, although in many cases they have developed their own technology that can prevent this type of attack.

Blockchains use cryptography. This means that data is encrypted, making it only usable by people who should actually have access to it.

Before the transaction can be sent, it still needs to be signed with a digital signature. Signing is done by means of cryptography. The digital signature can only be created with the right combination of the public and private key.

This makes it impossible for a hacker to impersonate another user if he is not in possession of that user’s private key. The public and private keys thus serve as pseudonyms for the owner of the cryptocurrencies.

Traditionally, a blockchain offers a high degree of privacy. This is because people do not need to register on the blockchain with their personal information. The wallet address serves as the user’s identity. Nowadays, however, things work a little differently, meaning that a blockchain is no longer as anonymous as it used to be.

People who register on a crypto exchange, in order to buy and sell cryptocurrency, will in almost all cases have to go through a KYC procedure. KYC stands for “Know Your Customer” and refers to the verification process of users of an exchange. Among other things, a copy of the identity document must be shown so that the exchange can verify the identity. This verification is designed to stop criminal practices such as money laundering and tax evasion.

A blockchain consists of a network of nodes and a chain of blocks. The nodes ensure the control and processing of transactions without the intervention of a central authority. A blockchain is thus decentralized, transparent, works peer-to-peer and is immutable.

Despite the fact that blockchains have become known primarily for cryptocurrencies, it can be used for multiple functions. Because a blockchain can store data, healthcare facilities could store patient data on the blockchain. Also, developers have the ability to develop an application that runs on the blockchain, which has created new industries on the blockchain.

In addition to the numerous possibilities with blockchains, the strong security is also driving the popularity around blockchain technology. Data that is stored cannot be altered. They are encrypted through cryptography, allowing only the rightful owner to view or modify this data. It makes blockchain without a doubt one of the most revolutionary technologies since the birth of the Internet.

Table of contents
Beginner - Lesson 3
Go to the next lessonWhat is Bitcoin (BTC)?