LoginSign Up
Table of contents
Lesson 1
What is money and what forms exist? 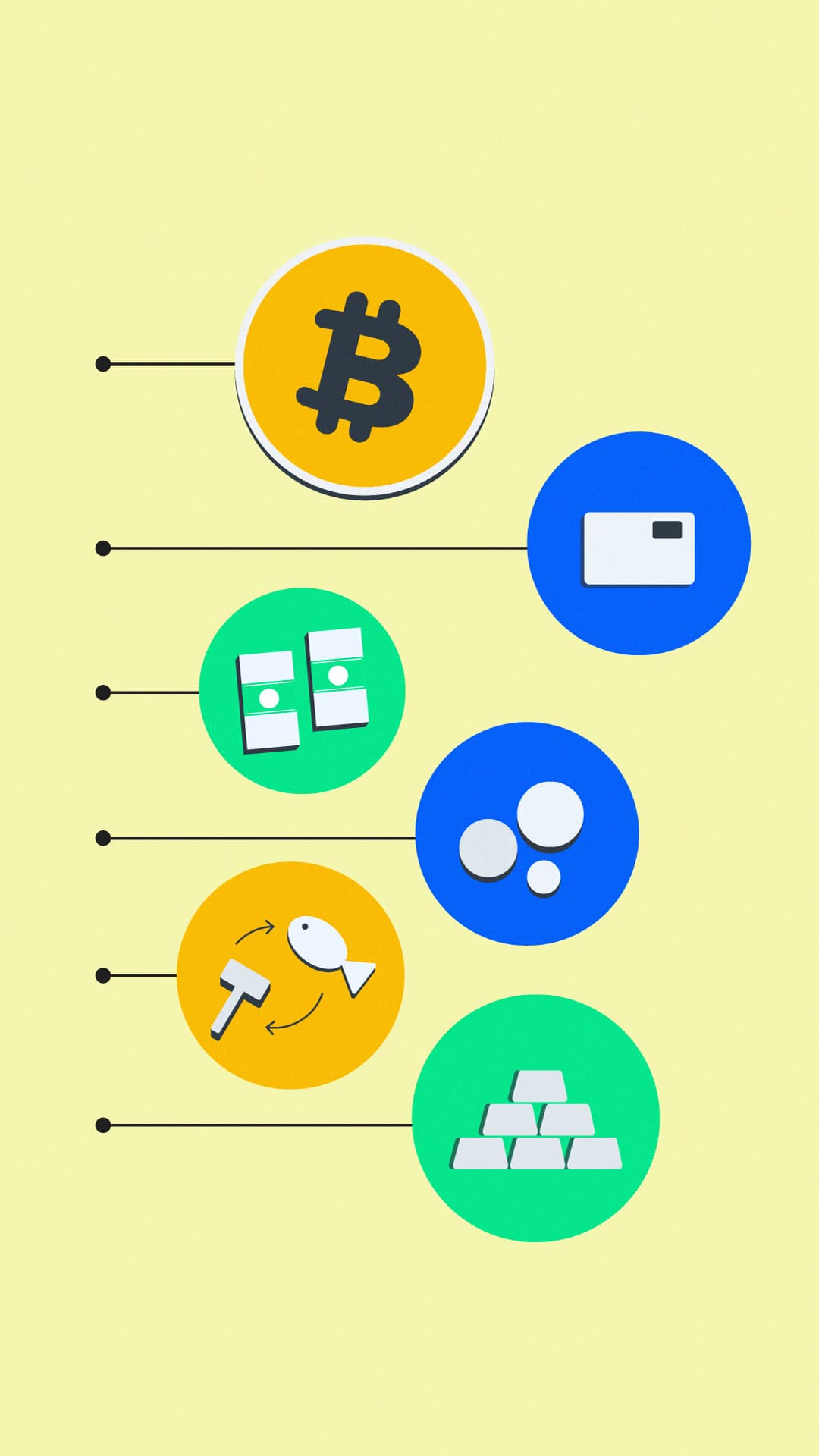 What is money and what forms exist?

In order to properly understand the world of cryptocurrencies and blockchain, it’s important to first learn more about what money has looked like over time and how it has been used. We will therefore start at the beginning: the history of money.

Money plays an important role in our everyday life, but it hasn’t always looked the way it does today. It’s fascinating to see the various roles, forms, and functions money has played and held over the centuries. The most recent development in the world of money is the rise of cryptocurrencies, which has been in part been a response to financial crises.

The first form of money goes back at least 2,000 years before we started counting years. Money often changed forms during that period, but the basic principle remained the same. This basic principle is that it serves as an economic exchange tool, although money also serves other purposes.

Our current world is difficult to imagine without money in any form. Without money, we’d live in a barter economy, exchanging goods and services. This has several disadvantages. For example, a butcher can only purchase grain by swapping it for a pig. However, not everyone will need a pig, while grain may very well be available only in limited quantities. While the pig thus may be worth a lot of grain, problems arise in exchanging it, given the limited supply.

A barter economy then becomes a complicated way of finding the right persons at the right time to exchange the right goods. The butcher cannot make bread before finding someone to exchange goods with.

What does it take for money to be regarded as such?

The five decisive characteristics of money that it must be scarce, shareable, recognizable and portable. Money is only considered money when a population trusts this currency or form of money. While a government may appoint a certain currency as the official means of payment, it won’t be considered money unless the population uses that currency. Social acceptance of money is therefore important for something to be considered money.

Before there was money in the form we’re familiar with now, goods were used as a form of payment. However, this didn’t always work well, since salt, tea or herbs could become unusable and lose their value.

The history and forms of money

Money has a long history and throughout history has taken many forms. In principle, anything can become a form of money, based on a mix of custom, social use and general acceptance.

Shells, barley, peppercorns, gold and silver at some point all were used as money. The island of Yap in the Pacific Ocean even used large disks of stone as payment method. These disks came from afar, via a dangerous journey to the islands of Palau. People from Yap often died during these journeys, which could take years. When the first Europeans arrived in Yap, they started helping transporting the stones, and also brought better tools to work the stones. The stones have an oral history and still change owners in this manner. Around the year 1700, Jesuits were the first to name these stones, and they often appear in marine logs throughout the 1800s. It was now possible to collect and process larger stones. However, it’s the older and smaller stones that now carry the greatest value in Yap, thanks to their longer oral delivery and history, and because they were more scarce at the time. This example shows how scarcity also adds value to a currency.

It’s not too long ago, namely at the end of the Second World War, that cigarettes were used as currency in Germany. In modern prisons, cigarettes are something still used as a means of exchange.

The development of a currency also in part depends on innovations in the objects that can be used as money. For example, when a better and strong material is found that can serve as money, that will generally be preferred over a weaker material. It doesn’t matter which raw material is involved, so long as the desired product has value, and is durable, portable, shareable, transportable, has a good shelf-life and can easily be stored. These are important features of money that also contribute to the form that money ultimately assumes. For example, polymer is increasingly used in the production of paper money, because the resulting notes last longer than paper notes and are moreover more hygienic. These notes meet all required criteria of money, since they are durable, portable, shareable, transportable, have a good shelf-life and can easily be stored.

In history, it was mostly metal raw materials that were used as money. The advantage of metal is that it has an intrinsic value and is easy to use. Early on, iron, silver, etc., were allotted value by weight. Later on, government or sovereign rulers changed this by putting a stamp on it. This had the advantage of giving the metal a fixed value.

Metal money can be traced back to Babylon, 2000 BC. The first commonly known use of coins dates back to the 7th century BC. These coins came from Croesus, the king of Lydia, in the current Anatolia.

Throughout the centuries, metal coins have created various problems. For example, it was difficult to cut slices of gold and silver, and moving large quantities of money made for very heavy loads. Instead of using pure gold or solver, other, cheaper metals were often added to a coin. This lowered the value of these coins, a process that is also referred to as debasement. The more inferior metals were added to a coin in the place of precious metals, the lower the intrinsic value of the coin. Soon after, paper money arose.

Notes and the rise of fiduciary money

The first use of paper notes occurred in China, about 1000 years ago.

Towards the end of the 18th century, paper notes found their way to other parts of the world.

This paper money originally provided proof that someone owned an object, such as a certain amount of gold, being kept by a central bank in a safe.
The quantity of gold represented by the paper note determined the value of the note, also referred to as the gold standard.

Because the money supply of the United States was limited by the gold standard, the American president Nixon in 1971 decoupled the dollar from the gold standard.
This allowed for new money to be printed since it was no longer covered by gold, but rather by (the confidence in) the American economy.

This form of money, deriving its value not from another product (such as gold), but from the confidence that a population has in the currency, is called fiduciary money.

These days almost all money that was use is fiat money. For example, the US dollar is fiat money, as is the Euro and the British pound. Fiat money can take money forms: the money on your debit card, the balance on your credit card, the mortgage on your home and your wages: they are all based on the confidence we have in authorities such as the American government and the European Union.

In 1983, David Chaum was the first to come up with the idea of digital money. In 1989, he started the company Digicash in Amsterdam, which was focused on electronic money.

Next, e-gold was introduced in 1996, becoming the first internet currency. This trend continued in 1998 when PayPal launched the first electronic USD payment method.

Commercial bank money is the money created by a bank to deposit on the bank account of a customer, for example for a loan. For a customer to use this, interest is charged by the bank. Banks are able to create this money, but they are restricted in volume by the limits determined by a Central Bank.

Banks these days often adopt fractional reserve banking. This means that a bank is able to lend more money than it holds in customer deposits. However, rules exist for this to help keep things in control. This measure was a direct outcome of the 2008 financial crisis. The result, however, is that 97% of money in today’s economy consists of bank deposits, while only 3% of money is cash.

A disadvantage of this method is that banks have increased the quantity of money in the economy by 11.5% annually over the past 40 years. The result is that the same amount of money continually devaluates; a process also referred to as inflation.

Another disadvantage of this method is that a new debt arises each time a loan is extended. This is at the source of global, large personal indebtedness. Not because money is being lent from someone’s savings, but because banks use money that does not actually exist. This debt can ultimately become too big, resulting in a situation where payment obligations are not met.

An example of this problem is for example the current low mortgage interest rates. Additionally, people and businesses alike can borrow relatively large amounts from banks. This is driving up housing prices, with prices almost literally going through the roof. And this in turn results in housing scarcity.

Because not everyone agreed with the monetary policies of governments and commercial banks, a long search occurred to find an alternative.

In 2008, the first viable alternative to fiat currency was developed: Bitcoin.

Bitcoin’s founder, the anonymous person or group names Satoshi Nakamoto, found that banks had abused their power, resulting in the financial crisis. He also found that nobody had  been held accountable for this crisis, which to him meant there was a need for a peer-to-peer, decentralized, cash money system.

The technology able to facilitate this is the so-called blockchain technology, which means maintaining a decentralized log of transactions, so that no single central party (such as a government or banks) controls money.

On 9 January 2009, the first Bitcoin saw daylight, marking the birth of the first cryptocurrency. More cryptocurrencies started appearing not long after.

More and more countries are currently researching virtual forms of fiat money. When a cryptocurrency is centrally issued, it is called a Central Bank Digital Currency (CBDC).

Does money keep its value?

Money does not always keep its value, as its value can change for example due to inflation, deflation or devaluation.

What role can money play?

Money plays various roles, and moreover solves the problems created by a barter economy. A currency’s main function is to serve as an accepted exchange tool.

However, a few secondary functions can be derived from this.

Money is important in people’s lives. Without money, our society would look different. A barter economy would be the most obvious alternative, but such an economy has many disadvantages. Money fulfills important functions, such as serving as payment method, calculation unit, and as value storage.

Cryptocurrencies are a form of money on the rise since 2009. This is a digital form of money that is being used by an increasing number of money as payment method or investment. An important feature of cryptocurrencies is that they are managed decentralized by the blockchain, on which this currency is running.

Table of contents
Beginner - Lesson 1
Go to the next lessonWhat is the difference between fiat money and cryptocurrency?