LoginSign Up
Table of contents
Lesson 12
What is the blockchain trilemma? 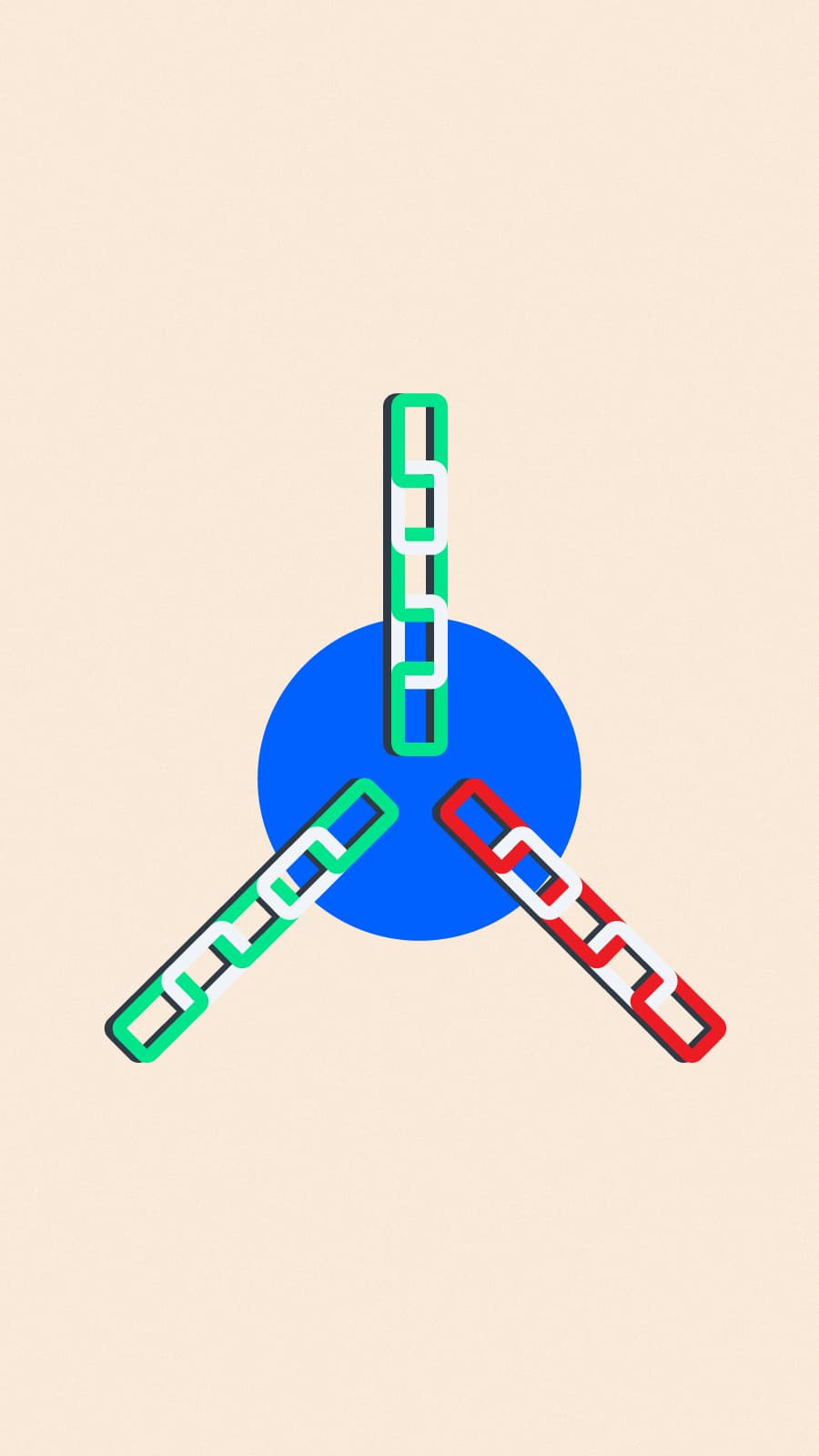 What is the blockchain trilemma?

The term ‘blockchain trilemma’ arose once people started noticing that blockchain traditionally speaking always met two characteristics, but that they were unsuccessful in meeting all three. For example, Bitcoin and Ethereum are decentralized and safe, but struggle to reach optimal scalability.

In many cases, an assessment is made of whether a blockchain meets all three characteristics in order to determine whether the blockchain can be widely adopted. This does not mean that a blockchain facing the blockchain trilemma will never be adopted. It really concerns the blockchain’s optimal operation, which can be achieved when a blockchain is scalable, decentralized and secure.

In the past, Bitcoin has tried to solve the scalability problem with various updates, including SegWit. The problem has become smaller, but has not been fully solved.

Ethereum likewise is in the process of becoming scalable with the upgrade to Ethereum 2.0. This upgrade, however, is still in the works and will likely be fully implemented in the course of 2022. It is not yet certain whether Ethereum’s blockchain after this upgrade will in fact reach infinite scalability.

Decentralization is one of the most important features of a blockchain, since it was a response to the discontent around centralized systems like banking. Decentralization exists when the blockchain’s network comprises a large group of independent nodes.

There are blockchain that consist of a large network of nodes, but these nodes are then controlled by a central party. It is then not possible or very difficult as an individual to place an own node in the network. This is detrimental to the blockchain’s decentralization. The decentralization of a network is therefore not only measured on the basis of the number of nodes that a network consists of. It is also important to consider who are nodes’ administrators. If almost all nodes are managed by one or a few parties, then decentralization will be nowhere near.

When a blockchain is safe and scalable, it often has problems with the network’s decentralization. This is for example the case with a project like Ripple. There are only a limited number of nodes (70) in Ripple’s network, which are all managed by Ripple itself. It is therefore not possible to place a node in Ripple’s network yourself.

Bitcoin and Ethereum are perfect examples of blockchains that face scalability problems. Both blockchains are decentralized and safe, but in the past few years have faced a lot of problems with scalability. More and more people started using these blockchains, as a result of which they at some point could no longer handle the number of transactions performed.

For example, Ethereum’s blockchain can perform 14 transactions per second, while Bitcoin can only handle 7 per second. This can be compared to a busy motorway. At some point, traffic jams will occur. Within a blockchain, such a traffic jam is referred to as ‘network congestion’.

The result of a low degree of scalability is that users will need to wait for a long time before their transaction is performed. This can sometimes take tens of minutes. Another consideration is the high transaction fees. For example, in 2021 users sometimes had to pay over one hundred euros in transaction fees to carry out a transaction on Ethereum’s blockchain.

It is important that blockchains are safe. After all, there is sensitive data on a blockchain, and the value of cryptocurrencies is very high. One successful hack could therefore cause uncontrollable damage.

Blockchains that are scalable and decentralized often struggle with security. One example is IOTA. IOTA’s network comprises ‘smart’ devices. For example, a smart TV, smart refrigerator, etc. This makes it incredibly easy to add new devices to the network, making it very decentralized. The network can also very rapidly process transactions, which means it offers almost infinite scalability. Unfortunately, IOTA’s network is not safe and stable, and there have been various problems in the past in this regard.

Better security can be achieved by using protocols that check the word delivered by the nodes. However, this often slows a blockchain down, which causes problems with scalability. It also reduces nodes’ access to the network, making the project less decentralized.

How can the blockchain trilemma be resolved?

For existing blockchains, it is difficult to easily solve the blockchain trilemma. When they believe they have found a solution, they discover that a problem arises with one of the other important features.

If a solution is found that doesn’t jeopardize the operation of any of the three characteristics, an upgrade still needs to be implemented first. All of the nodes in the blockchain’s network have to install this update to resolve the problem. If they fail to do so, the problem also will not have been resolved.

Nodes can have various reasons not to install an update. In some cases, it may result in them receiving lower rewards, or require them to purchase new hardware to meet the update requirements.

Ethereum also faces a lot of problems in terms of scalability. It takes a long time before a transaction is processed, and users sometimes pay upwards of one hundred euro to perform a transaction. That’s why the developers behind Ethereum decided to come up with an upgrade under the name Ethereum 2.0.

The most important change in Ethereum 2.0 is the transition to a different consensus mechanism. Ethereum uses Proof of Work, which is very safe and decentralized. However, it is considered a mechanism that stands in the way of scalability. That’s why a decision was made to switch to Proof of Stake.

Proof of Stake is a mechanism that is more scalable, because transactions can be processed more quickly. It also requires less energy, as a result of which Ethereum has become less sustainable with this upgrade than it previously was. However, the problem is that nobody is sure where this upgrade will in fact solve the scalability problem.

The Proof of Stake consensus mechanism has not yet been tested on such a large scale. The expectation is that the upgrade to Ethereum 2.0 will be completed in the course of 2022. It will then become clear whether this upgrade does indeed resolve Ethereum’s scalability problem.

SegWit stands for ‘segregated witness’ and is an important update for Bitcoin’s network that is meant to solve the scalability problem. These updates are meant to adjust the blocks’ structure, as a result of which more transactions will fit into a block.

Although this update has indeed allowed for more transactions to fit into a Bitcoin block, the update has not resolved the scalability issue.

For example, Cardano is a project that completed years of research. They claim to have developed a blockchain that is scalable, decentralized and secure. However, the blockchain has not yet been widely deployed, and it is therefore not yet certain whether they did indeed succeed.

The decentralization, scalability and security are three characteristics that a blockchain should have to be able to be used on a large scale without issues. However, this is easier said than done. Many blockchains have two of these characteristics, but fail to also achieve the third.

Blockchains facing these problems try to find solutions through upgrades. For example, Bitcoin has in the past installed the SegWit update, and Ethereum is in the process of upgrading to 2.0. New blockchain projects are primarily focused on preventing the blockchain trilemma. They do so by researching other blockchains and the problems they encounter, to ensure that they themselves will not encounter those same problems.

Table of contents
Intermediate - Lesson 12
Go to the next lessonWhat is SegWit?