LoginSign Up
Table of contents
Lesson 3
What are candlestick patterns? 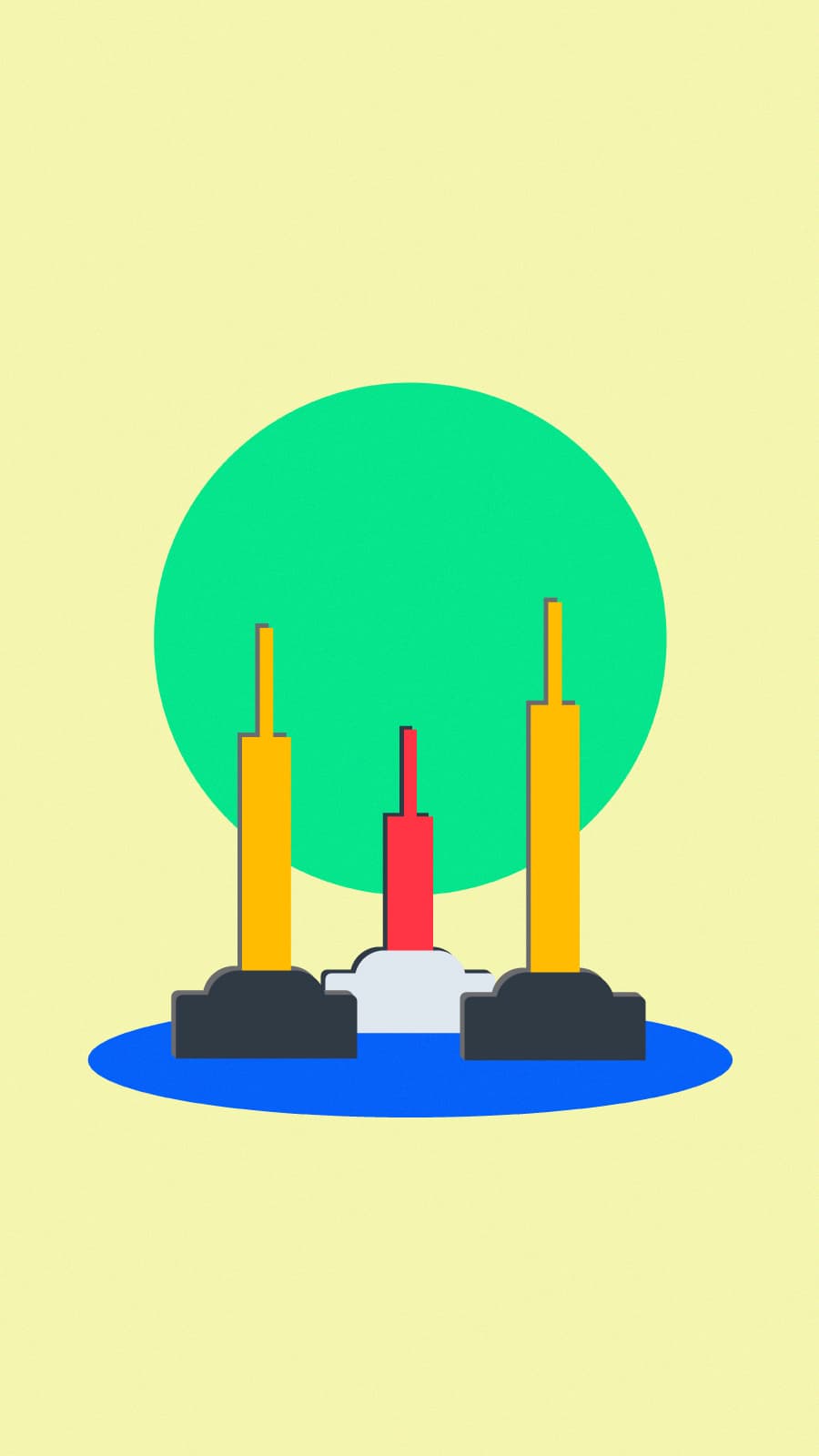 What are candlestick patterns?

Candlesticks are coloured lines used in price charts of cryptocurrencies and exchange products. They are used to indicate price changes. Such a chart consists of several candles, all of which indicate a certain time frame. It is possible to change the time frame yourself. For example, it is possible to view candles of one minute, five minutes, one hour or one day, and so on.

In addition to the colours, there are a number of differences between the candles. This concerns the body of the candle. For example, there is a section that is thicker, with a thin line protruding above and below.

In addition to the body, each candle also has two thin protruding lines, which are also called the ‘wick’ or ‘shadow’. The top wick represents the highest price the cryptocurrency has reached within the time frame that has been set. The lower wick indicates the lowest price the cryptocurrency has reached within the set time frame. When the wicks are very long, it could be concluded that there have been large price fluctuations in the set time period.

What is a candlestick pattern?

Because a lot of data is available, patterns can be recognised. Such a pattern may look different at first glance, but often there is a certain mathematical logic behind it.

By recognising certain patterns, a prediction can be made on what the future price of a cryptocurrency will look like. Of course, these patterns offer no certainty. However, it can be used as an aid in determining a strategy.

To understand the most common candlestick patterns, it is important to know the support and resistance lines of a price.

The moving average of a price is used by many crypto traders when using a candlestick chart. It is a powerful tool because it shows what the average price of a cryptocurrency is during a certain period.

It can often be seen that this line continues below the candlesticks, so that it acts as a support line. However, there will then come a point where the line crosses above the candlesticks, after which it becomes a resistance line. Many crypto traders use this line to determine a pattern in the price reversal. This way they can capitalise on the price when they think the moving averages indicate a reversal of the price.

Past price movements may repeat themselves in the future, although this is of course never entirely certain. Therefore, by recognizing certain candlestick patterns, it is possible to make a plan for future trades. The candlestick patterns below are the best known and most important to know.

The bullish engulfing pattern indicates a possible price increase. The pattern can be recognized when a red candlestick is followed by a green candlestick whose bottom and top both protrude above and below the red candlestick. This means that the closing price is above the opening price of the previous candlestick and indicates a solid change in sentiment.

The shooting star pattern may indicate a future price drop. After the price has first risen sharply, there is a candlestick with a small body and long wick sticking out at the top of the body. It indicates that the price has risen very quickly and buyers are having a hard time keeping up with the price increase. This ensures that there is a high protruding wick at the top, while the closing price ends up close to the opening price.

The doji pattern can be recognised by three candles, the first of which is green. Then comes a candlestick whose opening price is equal to the closing price. This means that, on average, supply and demand were equal. During this time, the price may have gone up or down once before returning to the same level as the opening price. Hence, a protruding wick is often visible.

A doji can indicate both a price increase and decrease, although this is often difficult to determine. In many cases, a doji is visible at the absolute top or bottom. The next candlestick often indicates the direction in which the price will go.

How can you recognise candlestick patterns yourself?

The above candlestick patterns are just a few of the many patterns that are known. Applying these candlestick patterns when trading cryptocurrencies is often more difficult than expected. Usually it makes little sense to go through the patterns only once. A pattern can be displayed in different forms, although this also depends on the time period that is set.

In addition, it is important to remember that a pattern does not guarantee a price increase or decrease. There is also a good chance that the price will eventually move differently than the pattern would seem to indicate. For this reason, other methods and tools are also widely used to predict the price of a cryptocurrency.

Not only the colour of the candlestick is an important feature, the shape of the body also says a lot about how a cryptocurrency has been traded within a certain time frame. The thicker part indicates the opening and closing of the price, while the protruding part, the wick, indicates the highest and lowest price for which a cryptocurrency has been traded within the set time period.

Table of contents
Intermediate - Lesson 3
Go to the next lessonWhat is the difference between the maker and taker fee?