LoginSign Up
Table of contents
Lesson 11
What is Ethereum? 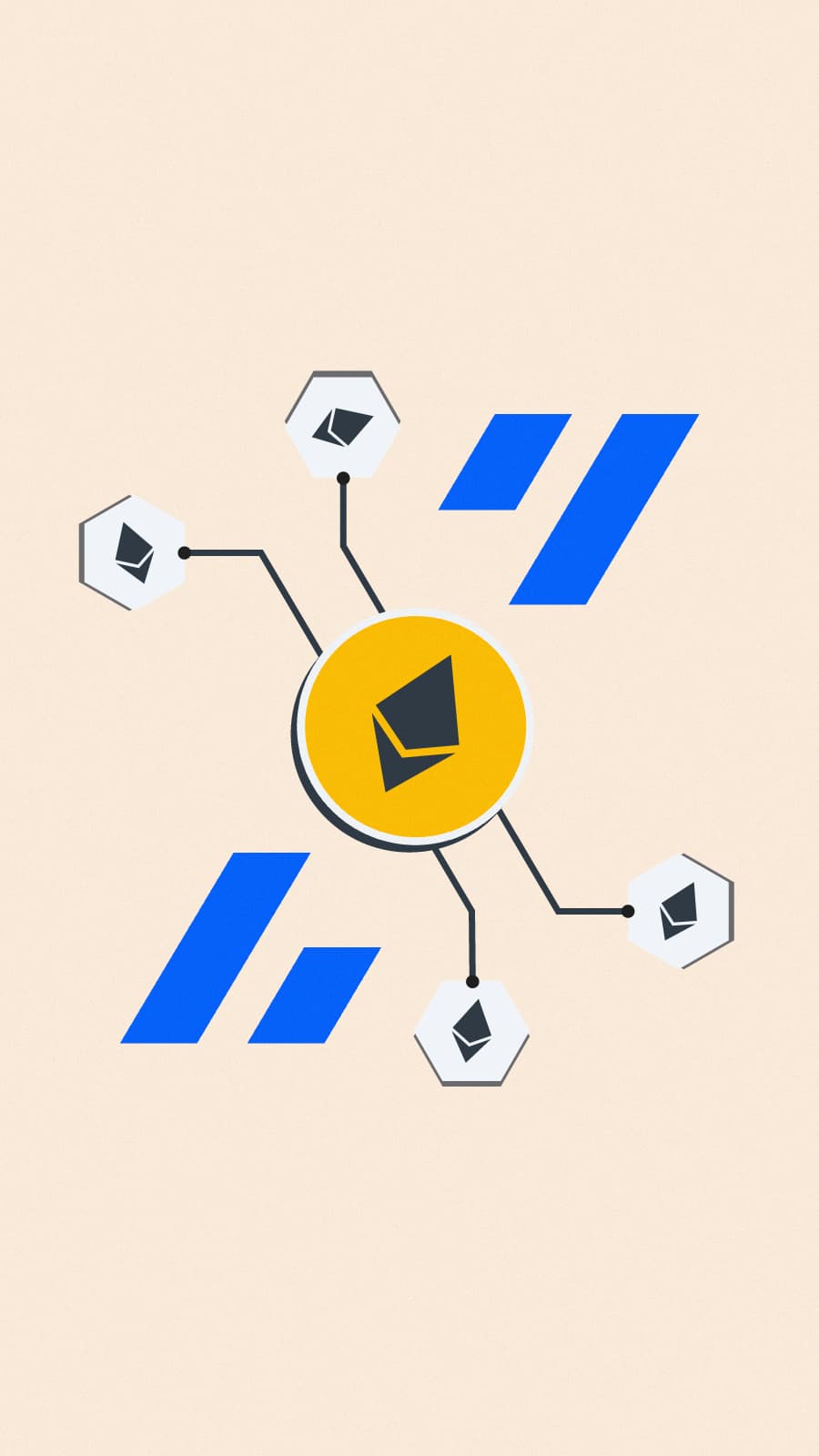 Like Bitcoin, Ethereum is a decentralized platform that uses blockchain technology. Ethereum also has its own cryptocurrency named Ether (ETH). Unique to Ethereum is that developers can create their own applications and functions that work on all computers connected to the Ethereum network. Ethereum calls itself “the most programmable network in the world”. The vision of Ethereum’s founders is to create an indestructible, censorship-resistant, self-sufficient and decentralized world computer over the Ethereum network.

Ethereum therefore allows for a lot more to be done than just carrying out financial transactions. Because it is possible to program applications and smart contracts (see below) for the Ethereum network, Ethereum is sometimes also called “the new internet”.

Applications of Ethereum and the blockchain

The technology behind the blockchain isn’t easy. However, Ethereum makes it easier to develop applications (apps) that use blockchain technology. These applications can be used, among other things, to carry out transactions in a decentralized manner. In the Ethereum network, these applications are referred to as dApps (decentralized apps). A dApp uses a smart contract in combination with a front-end user interface in order to make the use of the application more enjoyable for the users. Smart contracts will be explained further down in this article.

How does a dApp work?

How to connect to the Ethereum network?

The Ethereum client software, however, also allows you to do other things. The software makes it possible to connect to the Ethereum network and use the network. You can also create new transactions and new smart contracts with the software, as well as carry out existing smart contracts. When a computer validates a new block and adds it to the blockchain, it will – just as with the Bitcoin blockchain – be rewarded. In this case, the reward is the crypto coin Ether.

What’s the difference between Ethereum and Bitcoin?

Ethereum was created as a network that allows developers and programmers to create and publish dApps. This makes it different from Bitcoin in the sense that Ethereum is a programmable network that also serves as a sort of marketplace for financial services, games and applications. The payment method on this marketplace is of course Ethereum’s own cryptocurrency, Ether. The Bitcoin blockchain often uses the analogy of a distributed ledger. Because the use of this marketplace is a more complex function than simply sending and receiving currency, a more advanced analogy is needed to describe Ethereum. Instead of being just a distributed ledger, Ethereum is a distributed machine called Ethereum Virtual Machine (EVM, see below).

What’s the difference between Ethereum and Ether?

The terms Ethereum and Ether are often used interchangeably. However, they carry very different meanings. Ethereum is an entire network. On this network, a token (crypto coin) is available that represents a certain value. This crypto coin can be used to make payments. According to the principle of a decentralized network and the blockchain, miners must also be paid for the validation work that they perform. The tokens on the Ethereum network are called Ethers. Ethers are therefore crypto coins that are traded on the Ethereum network.

A smart contract is a contract that can execute itself, and for which the terms and conditions agreed between the buyer and seller are programmed in the conrtact code. In other words, a smart contract is a computer program that works according to the principle of “if this happens, then do that”. The many computers connected to the Ethereum network execute these programs, and check them in order to guarantee the reliability of the network.

How do smart contracts work?

The Ethereum Virtual Machine (EVM) is a single entity that is maintained by the thousands of computers connected to the Ethereum network via the Ethereum client software.

The Ethereum protocol itself exists in order to guarantee the uninterrupted, unalterable and continuous operation of the EVM. The EVM is “the brain” of Ethereum: it is the environment where all Ethereum accounts and smart contracts are stored. To make another comparison with the Bitcoin network: the existence of the ethereum network is a large data structure that contains not just all accounts and balances (like Bitcoin), but also a machine status (EVM). The machine status can change from block to block according to a predefined set of rules. The EVM can also carry out random machine code, and the specific rules to change the status from block to block is determined by the EVM.

How are smart contracts created and executed?

The amount of gas is determined per contract, but the gas price depends on the user and the time at which the request is submitted. Every miner will look at the proposed gas price and determine whether he wants to include the contract in his block. The higher the gas price, the more motivated miners will be to execute the smart contract.

A second limitation is that smart contracts have a maximum size of 24 kB. If larger, the contract will not have enough “gas” to be executed. This limitation can be circumvented by using the “Diamond Pattern”. A diamond is a contract with external functions supplied by contracts called “facets”. Facets, in turn, are separate, independent contracts that can share internal functions, libraries and status variables.

Ethereum is a decentralized platform that uses blockchain technology to execute transactions. Transactions are not just financial transactions, but for example also sending messages or calculating comparisons. Ethereum also has its own cryptocurrency called Ether (ETH).

Unique to the Ethereum network is that it does not just maintain decentralized ledger of all transactions, but that the network itself is programmable. Ethereum is therefore a decentralized computer that is spread out across the globe through the connected miners.

An important part of Ethereum is smart contracts. Smart contracts are small computer program that have a certain function. They work according to the principles “if this happens, then do that”. Anyone can make a smart contract, and anyone can activate an existing smart contract. Gas is needed to do so. When a smart contract is activates, it has to be executed and checked by every miner on the network using the Ethereum Virtual Machine (EVM). The gas is used to pay the miners for their work.

Table of contents
Beginner - Lesson 11
Go to the next lessonWhat are Altcoins and what is Marketcap?