LoginSign Up
Table of contents
Lesson 9
Are public blockchains safe? 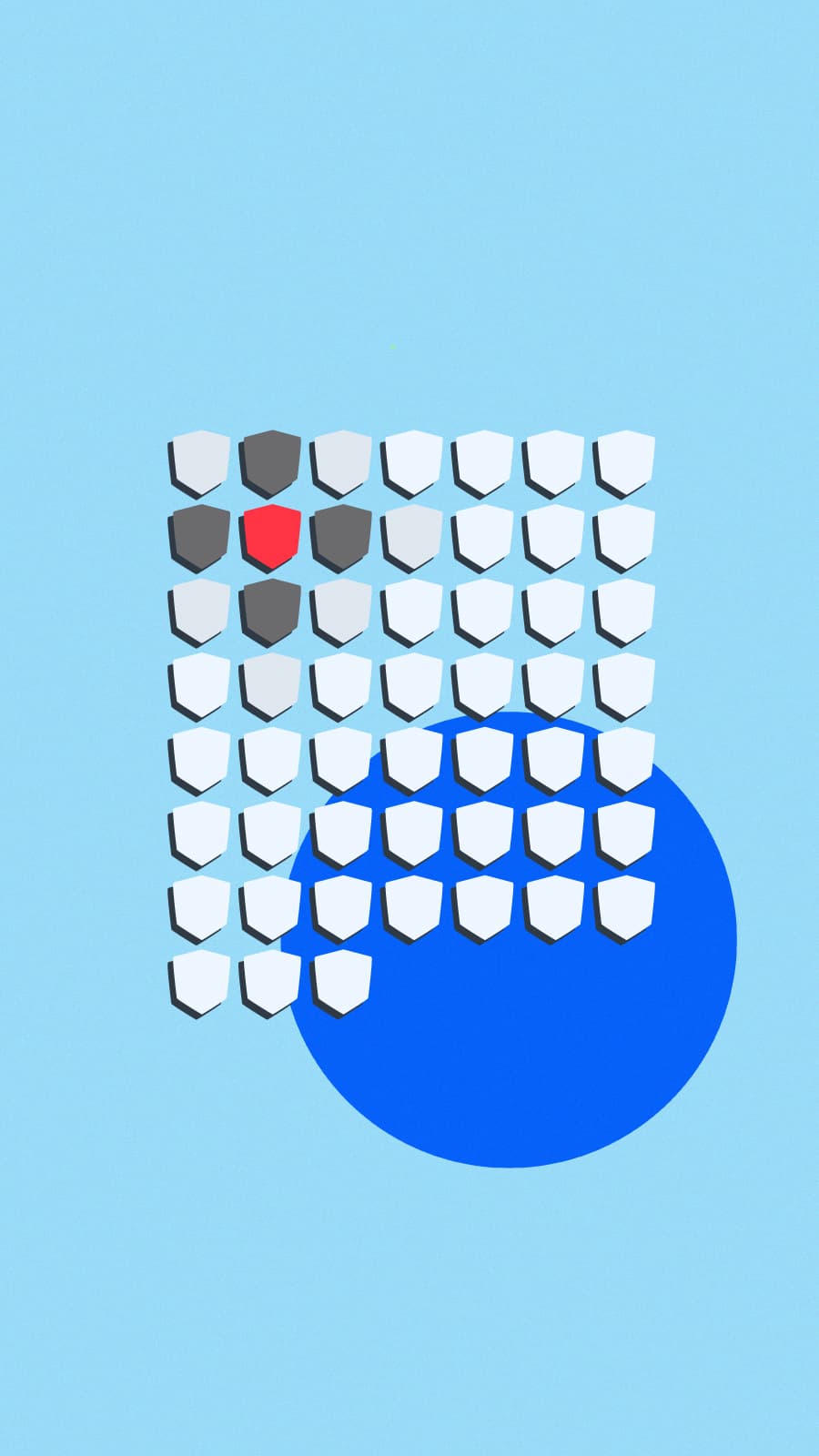 On the other hand, this also means that a large network of different computers is responsible for storing data and validating transactions.

If the security of certain data requires privacy, a public blockchain may not be the most appropriate solution.

The blockchain’s large network however ensures there is no single-point-of-failure. When a web server is attacked, the website on it is no longer accessible. Should one node be attacked, it will not affect the operation of the rest of the blockchain. After all, the network consists of thousands of computers. These all have to be unavailable for the blockchain to come to a stop. The chance that this happens is incredibly small.

What is a public blockchain?

A public blockchain is a blockchain that is public and available to anyone. This means that users can carry out transactions without requesting permission. Developers are also able to develop an application on the blockchain, provided the blockchain is fit for this. This is only possible when the blockchain provides support for smart contracts, as is the case with Ethereum.

Because everyone can participate in the blockchain, rules were drawn up. This is the blockchain’s consensus algorithm that ensures that the blockchain participants are sticking to the rules. When this does not happen, users are automatically penalized. What this punishment looks like differs from blockchain to blockchain. For example, the system can impose a fine, but the user can also be banned.

A decentralized network is a network that consists of a large number of devices that are all connected to each other. This is in contrast to a centralized network, which consists of only one or several devices. For example, think of a web server with a single-point-of failure: once the web server is disabled due to an attack, the websites on it won’t be available to anyone.

Blockchains have no single-point-of-failure because many devices must be disabled before the blockchain stops working.

The difference between public and private blockchains

Private blockchains are primarily used by companies, organizations and governments. For example, a large company with various branches could create a private blockchain, whereby each branch has its own server that forms part of the blockchain.

The servers are connected to each other, and as a result the various locations can quickly and safely exchange data with each other. The most important advantage of a private blockchain is security. Because the network is completely shielded, the developer can set the blockchain’s network up himself. It is not possible for other devices to access the network, meaning that data stored on the blockchain is in safe hands.

The third type is hybrid blockchains. This is a combination between the public and private blockchain. The blockchain in this case is not entirely closed off from the outside world, although not just anyone can participate in its network.

Instead, nodes can register to join the network, after which they’ll need to be approved in order to gain access to the network. This can be done through a vote, whereby a large group of people vote on who they trust the most. Or a number of people, such as the blockchain’s developers, can manually select these nodes.

Choosing the nodes that can go into the network is meant to ensure that only the best nodes participate in the network.

In contrast to a private blockchain, anyone can access the network of a public blockchain.

This can raise the question of whether the data and cryptocurrencies on a public blockchain are in a secure place.

The safety of a public blockchain is determined primarily by the way in which it is developed. Developers can use various techniques to guarantee the blockchain’s safety.

Generally, there are four features that guarantee a public blockchain’s safety:

These four features lead to the blockchain being regarded as one of the safest technologies of the moment. This applies to both private and public blockchains.

When a user wants to carry out a transaction, the user needs the wallet address of the recipient. He will then indicate how many cryptocurrencies he wants to send. He signs this transaction using his public and private key. Signing means that the transaction is converted to digit text, the so-called digital signature, with the help of an encryption mechanism,

The blockchain’s network checks whether the public and private keys are correct. This then also decides whether a transaction can be executed.

Cryptography ensures that nobody other than the persons entitled to it can access the content of a transaction. This is one of the most important components making public blockchains safe.

However, things can go wrong when someone has come into unjustified possession of someone else’s private keys. These, as the name implies, should be kept secret from everyone except the rightful owner of them. It is therefore important to never share your private keys with others.

What a block’s hash may look like entirely depends on the block’s content. Even if just one bit of the block is changed, the hash for the block will look completely different.

Every block contains the hash of the previous block. As a result, the blocks are all connected to each other in a chain, explaining the term “blockchain”. If someone were to change the content of a block, this will also change the hash of the block. This then results in the hash in the next block being incorrect, creating a breach. The network will therefore immediately notice when someone tries to alter the blockchain’s history. This version is then declared invalid.

An attacker may have the option to change all subsequent blocks, so that all hashes are still correct and avoiding a breach. However, most blockchains consist of a large number of blocks, making this practically impossible.

For example, approximately 144 blocks are added to Bitcoin’s blockchain every day. If an attacker were to change a block added to the blockchain 7 days ago, the 1008 blocks that were subsequently added then also need to be updated. The energy required for this makes it almost impossible to achieve this.

The public blockchain’s network is decentralized. This means that the network comprises multiple computers that are connected to each other. Such a network sometimes consists of thousands of devices.

If a node deliberately approves invalid transaction, other nodes will quickly notice this. The nodes check each other’s work. If this is noticed, the network will vote to determine what should happen next. Byzantine Fault Tolerance (BFT) is used for this.

What that penalty may look like depends on the blockchain. Every blockchain has different rules for this. It can be decided to ban the node from the network, or the node can be fined.

It is impossible to develop a system without vulnerabilities. This is because various design decisions need to be made that determine the security of the blockchain.

For example, developers can develop the world’s fastest blockchain by using a specific technique. This technique could then create a vulnerability for the blockchain in another area. The developer will then need to consider what is more important: the speed or the safety of the blockchain.

This is of course only an example, but it indicates how blockchain developers themselves are able to decide how safe the blockchain is. Making certain design choices can solve problems, but also create other problems.

In the past, various possible vulnerabilities of blockchains have revealed themselves. Not all vulnerabilities have yet been exposed, although theoretically they are possible.

The 51% attack is the best-known vulnerability of blockchains. The Byzantine Fault Tolerance determines that no less than 51% of the network must support a decision before it can be executed.

However, implementing a 51% attack is easier said than done. It costs an enormous amount of money and energy to successfully carry out such an attack.

Most blockchains have large networks that protect them against a 51% attack. It is almost impossible to hold more than 51% of the network when the network consists of thousands of computers.

The Finney attack allows a hacker to spend his cryptocurrencies multiple times. He does this by creating a transaction and then validating it himself.

He then recreates the same transactions and sends them towards the blockchain’s network. If the network approves the transaction again, the attacker will have spent the same amount of cryptocurrencies twice.

In a Sybil attack, a hacker creates a large number of transactions that he sends to the network in a short span of time. The number is so large that the network can no longer handle the transactions, forcing the entire network to crash.

The nature of the Sybil attack resembles that of a DDoS (distributed denial of service) attack that can be carried out on centralized systems.

In case of theft of private and public keys it is not the entire network, but rather an individual user that becomes the victim. When a hacker gains possession of the public and private keys, he can pretend to be the victim. In this way, all of the victim’s cryptocurrencies can be sent to the hacker’s wallet.

Theft of private and public keys happens more frequently than is often thought. In most cases, hackers gain access to the victim’s keys through phishing.

It is therefore important never to click on a link or download a file that you do not trust. There have been multiple instances in the past of malware being installed in this manner, that then steals the private and public keys as soon as the victim uses the wallet.

This means that anyone can add a computer to the network and perform a transaction. This creates many opportunities, but can also raise questions about the security of the blockchain.

The security of public blockchains is determined by the design of the blockchain. Certain choices made during the design can provide various benefits, but they can also potentially compromise security.

There are four features that cause the blockchain to be considered one of the most secure technologies today: cryptography, immutability, decentralization and a consensus mechanism.

Still, there are several known vulnerabilities that blockchains can potentially suffer from.

One example is the 51% attack, where a hacker gains control of more than 51% of the entire blockchain network. This gives the hacker the ability to control what the network does, such as intentionally approving invalid transactions.

To prevent these types of attacks, blockchains have many security measures in place.

Table of contents
Beginner - Lesson 9
Go to the next lessonHow do I keep my cryptocurrency safe?